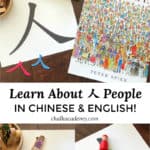 人 (Rén / Person) is one of the first Chinese characters that anyone can learn, and the timeless People book by Peter Spier is a wonderful for introduce the beauty of diversity to kids!

Here is a quick review of the beautifully illustrated book that celebrates different races and cultures!  Included are low-prep literacy activities that you can try with your child!

This post may have some affiliate links. If you click an affiliate link and make a purchase, I earn a small commission which supports our educational tips at no additional cost to you. Please see the disclosure policy for details.

人 (People) is a picture book that was originally published in English and has been translated to simplified and traditional Chinese.

We only have the hardcover English version, and I have been translating the words to Mandarin Chinese while reading some parts in English with my children.

Although the content contains many encyclopedic facts, the text of the English version is largely written in a conversation manner.

In the 人 (People) picture book, Spier celebrates human-kind and our wonderful diversity.  We are similar in many ways, and we are also uniquely different in the way we look, eat, play, speak, and worship.

Both of my children (2.5-year-old son and 5.5-year-old daughter) were captivated by the detailed illustrations.  There is so much to discuss on each page, and each read brings about a new discovery.

Try this: 15 Ways to Encourage Your Child to Read

People by Peter Spier:  We come in various dimensions and colors!

The book begins with how we all start small despite being different shapes, sizes, and colors.

I love this part:

“People are funny: Some with straight hair want theirs to be wavy, and others with little curls want theirs straight.”

People by Peter Spier: Different faces and standards of beauty

The subsequent page continues with the truth that beauty standards vary from culture to culture.  This was a great opportunity to discuss with my children the importance of respecting different appearances.

We also learned about games that are played in unfamiliar cultures.

And my daughter was excited to learn about Sign Language!

People by Peter Spier even has a page about various written scripts.  It was enlightening way for my oldest child to see that her 3 languages are only a few drops in a big bucket!

Regarding the image below, I’m unfamiliar with the various Chinese scripts here.  However, my daughter was excited that she could read the Korean words!

He was curious about the colorful pieces after seeing his big sister have fun building Chinese characters!

For this particular character, my son thought it was hilarious when I pretended the blue and pink 人 pieces were walking!

Please note that you might not need all of the above if your child remembers the character quickly.  However, if your child has trouble learning a concept, different hands-on approaches can help facilitate understanding.

Although my son can confidently identify the 人 Chinese character from the 3-dimensional toys, I printed 人 in large, Kaiti font so that he could see that the 2-dimensional print was the same character.

When he saw the large character, the first thing he did was touch it, and he was surprised that it was not rough!  He had expected a coarse texture after feeling our Montessori Chinese character sandpaper boards.

However, to keep it real, my son has no interest in this, perhaps due to his young age, or maybe it’s just not his thing.

You can lay the pretend play figures on the 人 Chinese character and/or have the figure walk along each stroke.

Remember to follow your child’s lead for learning as resistance to paternalistic ideas can spoil golden learning opportunities.

And to keep it real, the following photo shows that my son wanted to immediately build a little house for the people figures!

No worries though – he had a lot of fun, remembered the Chinese character, and was so attentive to the Peter Spier book!  Yay for learning success!

In summary, I highly recommend the Peter Spier book to accompany a 人 Chinese character lesson!  In addition, this is a timeless picture book for your home library!

RECOMMENDED ARTICLES ABOUT HOW TO TEACH KIDS CHINESE