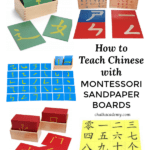 The Montessori teaching philosophy recognizes a child’s innate curiosity and the benefits of sensory input in reading and writing.  I am honored to host Peg Chiu, a multilingual mother, teacher, and behavior therapist to share how to use Montessori sandpaper boards to teach kids Chinese characters.

This post may have some affiliate links. If you click an affiliate link and make a purchase, I earn a small commission which supports our educational tips at no additional cost to you. Please see the disclosure policy for details.

Ms. Chiu is a mother of a 4.5 year-old trilingual girl.  Her daughter is learning Cantonese Chinese from Peg, Italian from Daddy, and English through hearing parents’ conversations and preschool. Ms. Chiu currently works in Jeddah, Saudi Arabia as a behavioral therapist and received her psychology degree and postgraduate special needs diploma in Hong Kong.  Previously, she was a primary school teacher in Hong Kong and obtained a Montessori degree from St. Nicholas Montessori College in Ireland.

Soon, she will return to Ireland and open a Montessori Chinese immersion preschool.  Her hope is that “Montessori preschool would not be just a place for the little men and women to enjoy learning all sorts of knowledge, including the beautiful Chinese language, but also a place that helps them prepare themselves to achieve their cosmic tasks in the universe.”

What are Montessori sandpaper materials?

Sandpaper letters and numbers are some of Dr. Montessori’s iconic learning materials for preparing prepare children to read and write.  The alphabet and numerals are cut from fine sandpaper and mounted on wooden boards.

Strokes are the most basic parts of Chinese characters, and stroke order is necessary in order to write Chinese.  Chinese strokes include 點、橫、豎、撇、捺、提、鈎、折 and other stroke types.

A character can be formed with a few simple single characters, also known as ‘components’. For example, 果 is formed by 2 simple characters: 田 and 木.  Both 田 and 木 are components of the character 果, but only 木 is the radical as it indicates that fruits 果 are from plants 木.

When radicals appear on the side, the shape of the character usually changes.  For example:

Side radicals should be compared with radical characters so that children recognize the shape change when it is part of a complicated character. You can show complex characters in books or in flash cards that include the side radical.

Understanding radical components also helps for communication when a child is writing by hand.  For example, if they forget how to write 拉, remind them by saying ‘剔手邊 + 立’.

Pinyin and Zhuyin are different phonetic alphabets for Mandarin Chinese.  Pinyin is used in China and Zhuyin is used in Taiwan. Pinyin and Zhuyin should be introduced after the child has a good knowledge of Chinese characters.  In her post ‘When should my child learn Hanyu Pinyin?‘, Betty explained very well the pros and cons of learning the Pinyin system.

My background in psychology and special education influences me to have a strong preference for sandpaper materials.  Indeed, Montessori education is an outstanding system for all children, including children with special needs. In addition, knowledge registers better with multiple senses.

It’s no wonder that sandpaper materials are seen in every Montessori classroom.  In addition, other schools have adopted this tactile idea for writing introduction.

When a child has good fine motor skills, understands the concept of symbols, and can hold simple Chinese conversations about daily life, then I would use the sandpaper materials for character recognition and writing preparation.

Related: When and How to Introduce Chinese Characters to Kids?

How to teach Chinese with the Montessori 3-period lesson

Select 3 characters (more or less depending on the child’s level and pace).  Start with easy ones first, or pick ones that the child relates to. For example, we can choose 一, 四, 七 in the Chinese number set.

This is basically direct demonstration with introduction of each board one at a time.

After finishing each board, some Montessori teachers will put completed boards off to a corner and turn the boards face down to decrease distraction.

*Please note that you can reduce the number of characters in the lesson.  Even one character in period 1 is okay.  Follow the pace of the child and do not rush.

The 3 periods can happen on the same day or on different days, depending on the pace of the child.  After the child has mastered the few characters in the 3-period lesson, pick 3 other characters to start a new cycle.

Other approaches to the Montessori 3-period lesson

You can separate the naming and tracing procedures, ie, use the sandpaper boards as flashcards at the beginning.  After the child has learned how to name all the sandpaper characters, you can move on to tracing. As always, you know the child best.  Never be afraid to change if the initial approach does not fit the child.

You can click here to download this tracing exercise with the help of stroke order strips in this link.  Through the exercise, the child would learn that radicals can be in different position in a character and their meanings are related.

I am sure you will have great fun using the sandpaper boards to learn Chinese characters!  Please share with us in the comments below!

Many thanks to Peg Chiu for sharing her passion and expertise. Learn more about her Chinese Montessori preschool, Caterina Bilingual Montessori, on Facebook. 大家加油！(Dàjiā jiāyóu / Rooting for you all!)

From around the web

We use cookies to optimize your experience on our website.OkayLearn more