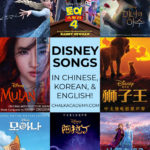 Anyone else obsessed with Disney music? EEEEEEEK!!!! I am SO excited to share about our family’s favorite Disney songs in Mandarin Chinese and Korean! Although I grew up watching Disney in English, we’ve been trying to connect our kids with heritage languages through songs and movies. Thankfully, several Disney hits have been translated into numerous languages!

Listen to this: 100+ Popular Korean Children’s Songs and Nursery Rhymes

Benefits of listening to Disney songs in Chinese, Korean, and other languages

Music is one of the best ways to learn and keep the interest alive in minority languages! If your child has been forgetting or rejecting the non-dominant language (we’ve been there!), try listening to Disney songs! Although the lyrics will be challenging for beginners, the catchy choruses and melody can create a positive foundation for future learning.

For the past few years, I have been learning Chinese with my 7-year-old daughter and 4-year-old son. While I’m still only conversational, my kids are pretty fluent for their ages.

Although these songs are too fast for me, my children have been self-learning Disney lyrics in Chinese and also some in Korean! Despite my kids rapidly forgetting how to speak Korean, I’m grateful that it’s remained in their life through music. We also listen to Disney songs in English so we can scaffold off our native language to understand the minority languages.

Just for fun, my daughter is also fascinated by Disney songs in Spanish, Japanese, and other languages! Through favorite tunes, they can quickly appreciate new languages!

That’s the benefit of young age; although I don’t learn as quickly these days, I still remember Feliz Navidad and Frère Jacques from my elementary school years!

Where to find Disney songs in Chinese, Korean, and other languages

Apple Music (iTunes), Spotify, and YouTube are your friends when it comes to multilingual Disney hits! I’ve compiled a list of complete Disney soundtracks in Mandarin Chinese and Korean below. Credit to my daughter for finding most of the Asian Disney songs! If your kids are like mine, these songs might be on replay for hours/weeks/months!

Although you can listen to many Disney songs for free on YouTube or through a subscription on Apple Music or Spotify, my advice is to buy and download any favorite Disney songs. After seeing Disney suddenly pull all DVDs and BluRays from Amazon, I was relieved that I have purchased our favorite Disney movies in Chinese and Korean many years ago.

The following 2 videos have been so inspiring for my children to hear one of their favorite songs in languages from around the world!

Here’s a beautiful performance of “All is Found” by Gina Alice in Mandarin Chinese!

Taeyeon gives a stunning performance of Into the Unknown in Korean!

Here’s a remix of “海洋之心 How Far I’ll Go” performance by A-Lin combined with highlights of the Moana movie.

I wasn’t able to find official music videos for the Korean Moana songs, but this is a great cover of “How Far I’ll Go 나 언젠가 떠날거야” and “I Am Moana 나는 모아나” by 이고은.

My kids actually have not seen Aladdin yet, but they are enjoying the songs.

Here’s a bilingual English and Korean cover by the talented Travys Kim. Check out his YouTube channel for many more multilingual performances!

My kids also have not seen Beauty at the Beast yet, but they still like the music!

This is one of my son’s favorite movies! The following links are actually for the complete soundtrack of Toy Story 4, but only a couple songs have lyrics. The rest are instrumental.

How to find lyrics for English, Chinese, and Korean Disney songs

If you have Apple Music, you can see song lyrics by tapping on the “quotation mark” icon at the bottom lefthand side of the screen. Please see red circle in the image below.

After tapping on the quotation icon, you’ll see the lyrics pop up! As shown below, the Chinese Moana lyrics are faded except for the line that is sung.

Below is an example of how the lyrics look in Korean for the Frozen 2 soundtrack.

What are your favorite Disney songs in Chinese, Korean, or other languages?

Did we include your favorite Disney songs, and are there other Disney hits that we’re missing? Please share in the comments below! We’d love to hear about your experience!