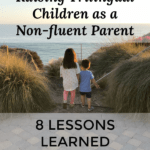 During this marathon journey of raising trilingual children as a non-fluent parent, I need time to catch my breath, step back, and reassess the big picture.  2018 was filled with big milestones for my trilingual children in addition to several challenges.  We are constantly humbled about how much there is to learn and balance among other important things in life.

Quick recap of our trilingual family

For those who are just joining our journey, we are raising trilingual children who speak English, Chinese, and Korean.

English is the dominant language in our small town, USA.  My children’s minority languages are Chinese (through me) and Korean (through our nanny).

After re-reading my “Lessons Learned from Raising Multilingual Children” post from last year, I realized that not too much has changed… except the list of “lessons learned” is getting longer.

Last year, I have been more comfortable about speaking Chinese to my kids outside of the home.  This might seem surprising since my website is dedicated to Chinese learning.

However, I confess that I have been embarrassed to practice what I preach outside of my home.  Not only are my Chinese skills limited, but we live in a non-diverse town.

During my childhood, speaking a “foreign” language resulted in derogatory looks and comments.  When my parents spoke Chinese in public, I would cringe.  I proudly told friends that I could not speak Chinese, because “I’m American.”

Only now in my mid-thirties do I finally have confidence and self-acceptance for how God created me.  If I do not respect myself, what example am I setting for my children?  Now, I will speak to my kids in Chinese at school, church, park, and grocery store without shame.

Related: Faith, Hope, and Love in a Foreign Heritage Language

2. Raising trilingual children is easier if you start early

When 老大 was 2, I began to learn and teach her Chinese, and she was extremely resistant to the new language.  After about a year, we began to speak Chinese fairly consistently.  Commitment and perseverance were necessary to overcome the challenges.

Korean was also a struggle despite my daughter being immersed in it from age 4 months to 22 months.  Between age 2-3 when we didn’t have a Korean nanny, she forgot it all, and then had to start all over again with our current nanny.

On the other hand, 老二 has been trilingual since birth. Since he was a baby, he has been regularly exposed to English, Chinese, and Korean.  His first words and sentences included all 3 languages, and being trilingual is all that he has ever known.  Therefore, he has never shown resistance to either minority language.

Try this: How to Make the Switch from Dominant to Minority Language

What does your child want to do today?  That is the first question that I ask when I consider what to teach my children, and I know the answer by observing and listening to them.

If my kids have a positive association with a certain person, place, or thing, they will be more receptive to using the minority language.

Whenever 老大 has shown resistance to Chinese or Korean, being attentive to her interests has helped to overcome the challenges.  If 老大 has her heart set on learning a song, teaching her lyrics while dancing will be more productive than tracing random Chinese characters from a textbook.

For my little guy 老二, we zoom his beloved cars around the house while talking about where we are going in Chinese or Korean.

4. Quality of exposure is more important than quantity

Since my kids hear 3 languages, exposure to each language is divided unequally throughout the week.

After roughly tracking our family’s language exposure in the last year, I noticed that English exposure for 老二 was only ~24% of the week.  Yet it is his dominant language because of weekend family time.  As a funny example, 老二 will randomly try to speak in a low voice and say an English sentence in the same manner as my husband!

During that year, although 老大 was in preschool only 3 half days per week, she began to speak English more spontaneously than Chinese and Korean.  Because she was making new memories with interesting friends at school, English became more useful.

Therefore, for minority languages like Chinese and Korean, our nanny and I have to speak consistently, listen to music and audiobooks for passive exposure, and engage the kids in memorable activities.

Try this: Teach Your Child a Second Language at Home with 5 Key Steps

At the start of 2018, we parted ways with my daughter’s Korean teacher because lessons became stressful.  老大 refused the teacher’s requests to read out loud, and she developed an aversion to Korean learning.  Therefore, we let her take a much-needed reading break from Korean for 8 months!

Over the summer, 老大 got back into speaking and reading Korean with our nanny.  Although Korean progress has been relatively slow, we cannot rush or force Korean.

6. Not all languages will be equal

When I asked my daughter what language she thinks in, without hesitation, she replied “Chinese”.  I suspected this might be her preferred language since I hear her dreaming and talking in her sleep in Chinese!

In addition, she almost always chooses Chinese books to read over English and Korean.  When my kids play together, they usually speak in English or Chinese.

Unfortunately, Korean is the weakest language of the kids’ 3 languages.  I believe this is because my husband and I cannot provide adequate support for Korean.

I wish I could devote as much energy and time to researching Korean resources, but Chinese already consumes all of my free time and energy.  Since I cannot speak or read Korean, shopping for Korean children’s books and music is extra challenging.

We are grateful that our nanny speaks Korean with the kids, but she is not fluent and mixes English into many sentences.  In addition, she has her regular English-speaking life when she goes home.

If my kids ever attend school full-time or our nanny decides to pursue other interests, I know that Korean would likely be the language that they lose.  In the meantime, we do the best we can to lay the groundwork for future learning.

7. Trilingual families: Be honest about your limits

Since my husband is Korean-American, I had hoped that he would teach them Korean.  Previously, I requested that he read at least one Korean book per week to the kids.

Now, I understand and respect his limits.  This marathon is not for everybody, and that’s okay.  My husband works 80-90 hours per week and often speaks Spanish with his patients.

During the short time that we have together on the weekend, he simply wants to think and speak in English.  Although he wishes that he could improve his Korean for the kids, we have to pick and choose our battles and use our time wisely.

Consider this: The Risks of Overnurturing with Multilingual Parenting

8. Language should connect, not divide a family

For a few months last year, my husband was worried about our children not learning “enough” English, that I had been focusing too much on Chinese.  As 老二 became more verbal, he mixed English, Chinese, and Korean frequently, causing my husband to feel excluded from the conversation.

I tried to reassure my husband that our children will be exposed to English more and more in their life.  Despite being raised by immigrant parents, my husband’s Korean is limited, and my Chinese is mediocre.

I also reminded him that it’s difficult to understand most 20-month-old kids, and that our 老大 had been unusually articulate as a toddler.

However, asking my husband to him to wait several months until he could understand my son was unfair.  He has been patient and supportive of our Chinese immersion at home.  However, I need to encourage the kids to speak English during family time by speaking English myself.

We all want to understand and be understood by those we love.

Related: Encourage A Child to Love and Speak the Minority Language with 5 Strategies

Despite the many challenges, raising trilingual children is worth the effort, and I’m grateful for the opportunity!

Are you raising bilingual or trilingual children?

How was language learning for your family in 2018?  What are your resolutions for 2019?

If you’re raising bilingual or trilingual children, I’d love to learn more about your experience. Please feel free to share in the comments below!

Advice on how to teach kids Chinese